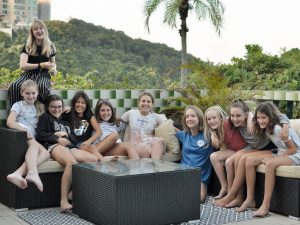 After pausing in February in response to the covid-19 pandemic, Hong Kong Girls Journeying Together group were able to gather again on Saturday 23rd May.  The girls had met on-line but nothing compares to actually being in each other’s company again.  Girls Journeying Together groups offer monthly support for preteen girls as they practice being true to themselves, learn about puberty, share their hopes and fears, and help each other into their teens guided by a facilitator.

Rites for Girls facilitator Macha Farrant began Hong Kong’s first Girls Journeying Together group in May 2019, welcoming eleven girls into her home each month for a year.  The girls are 10 to 12 years old and are from a diverse range of countries – Australia, Belgium, China, France, Hong Kong, Ireland and the UK.  They’ll finish with a celebration in July. 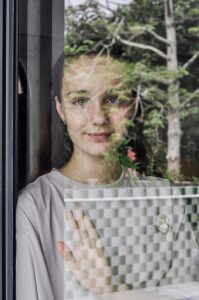 Phillipa Bloom, a professional photographer and mum to one of the girls in the Hong Kong Girls Journeying Together group started making portraits of the girls in May. Becoming 12 is a portrait series which mirrors the monthly rhythm of the group. In spite of the disruption of social distancing and self-isolation Phillipa found an ingenious way to continue the project. “I felt it was important to maintain continuity and communication with the girls but to do so safely and responsibly, under the circumstances,” says Phillipa. She incorporated the portrait shoots into her daily walks and photographed the girls inside their homes through glass windows or doors. “That way I could stay outside at a safe distance and, incidentally, was able to use the unusual reflections to frame the girls.”

On the broader aims of the project, Phillipa continues, “I’m photographing the girls over a year, giving them maximum agency over their own image (and minimal direction from me): what they wear, how and where they’re photographed, with whom. I’m interested not just in making images that celebrate each girls’ singularity but also in the process and challenges of relinquishing creative control, and how the shifting balance between photographer and sitter develops over time.”

What prompted you to begin this project? What gave you the idea?

When my daughter, Nina, decided to join Rites for Girls it was a gift – with the permission of the other girls and their families, I would be able to make a long-form portraiture study. It’s not the first portrait series on “tweenage” girls out there but what appealed to me most was the possibility of making this visual record at regular intervals, over 12 months, during a transitional period in the girls’ lives. On a practical level, it would enable me to practice making portraits with a greater personal connection, and provide the girls with a visual diary of their year.

What is your intention behind giving the girls maximum agency over their own image (and minimal direction from you)?

Partly in response to my own feelings about having my portrait taken growing up – usually under protest in formal clothes I loathed – and partly because I wanted to experiment with a more open approach to portrait making, minimally styled and staged, and see where it took us. It was about trust: mine in them and, hopefully, theirs in me. Most importantly, I hoped it would afford the girls’ an opportunity to express themselves more freely in their own unique way.

What has that process been like for you? For them?

I can’t speak for the girls, but I have personally learnt so much – not just about the process of making portraits, which has been liberating, but about working with young people. I really look forward to seeing the girls each month and to hearing their thoughts and ideas. They’re an impressive bunch. I think I’ve benefited from our sessions more than I could have imagined.

It’s been quite a steep learning curve for me especially, on occasion, the technical aspects of shooting in unfamiliar conditions that I can’t easily control. But more than any of that, I’m learning from the girls – about openness, about spontaneity, and about communication. It’s prompted quite a number of my own forgotten feelings about this pivotal period of childhood. And I’ve seen the girls’ growth too – there’s a confidence in them now that wasn’t there at the start of this series. I hope to reflect some of that in their portraits. It’s a beautiful arc of moments.

Congratulations to Phillipa for her Honorable Mention for four portraits from her series ‘becoming 12’ at the Julia Margaret Cameron Awards.
Phillipa portraits can be found on her personal website at https://www.phillipabloom.com

Founder director of Rites for Girls since 2011 and author of ‘From Daughter to Woman, parenting girls safely through their teens’. As originator and facilitator of Girls Journeying Together programmes she offers year-long groups for girls with simultaneous support for their mothers. She studied child psychology at Cambridge University, was a counsellor to distressed teenagers, taught sex education in schools and youth groups and is a mother of three. 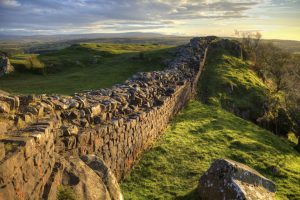 Dad and Daughter Journeying Together to raise money for us! 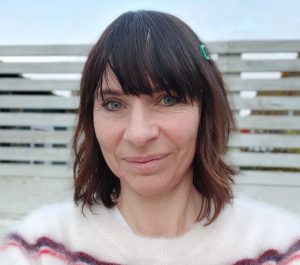 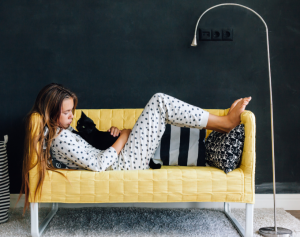